It's been too long since we last spoke. But there was good reason! After Maxx Charvelle's departure in December 2021, we immediately found a guitarist/master laptop tracks maker extraordinaire in one HORACE GRIMSBY! 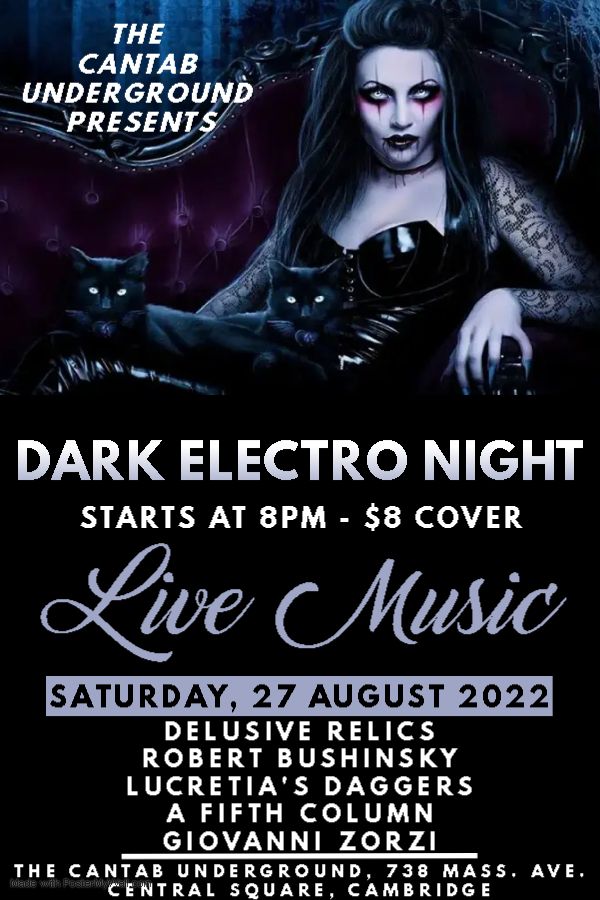 12am & DJing: Giovanni Zorzi - Influenced by a variety of styles that includes techno, house, electro and funk.

At long last...the search for the consummate guitar master and backing tracks maestro is over! 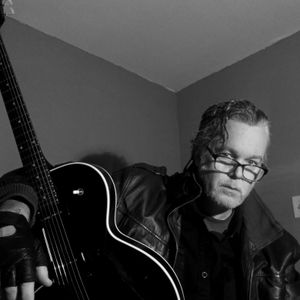 Lucretia and Donni look forward to a brand new year with our brand new LD member! 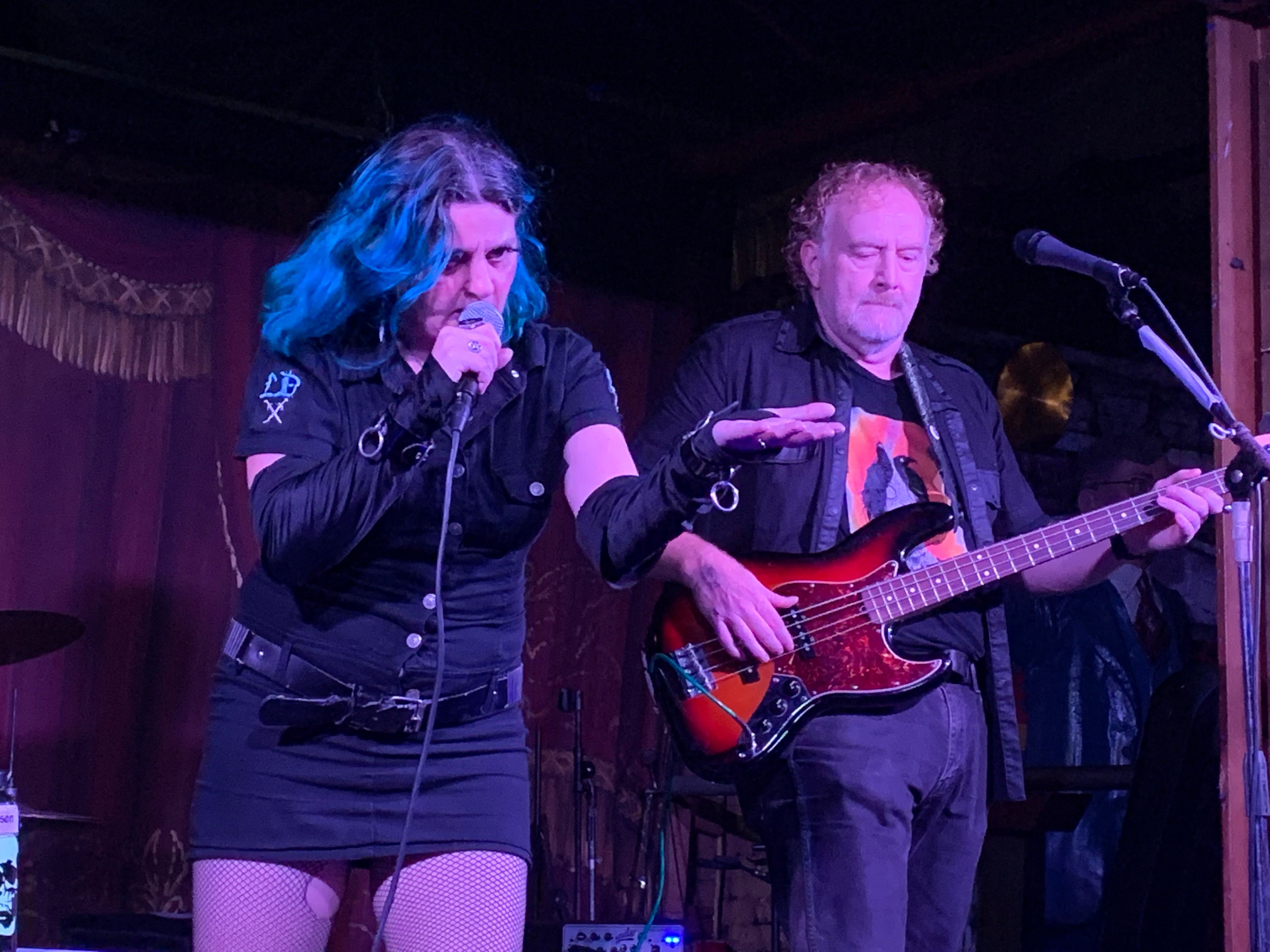 For our 2oth anniversary in 2021, we promised you FREE MUSIC VIDEOS on environmental and social justice issues, funded in part from a grant Lucretia's Daggers won from the Watertown Cultural Council (via the Massachusetts Cultural Council) & proceeds you provided us from our Indiegogo 20th Anniversary Merchandise Fundraising Campaign.

With tracks from our Earth Day 2019 EP, "Thoughts & Prayers": the first video, filmed on location in Watertown, MA regarding mental health/depression awareness ("Lonely Island"); the second, an animated climate change call to action ("New Army"). And here they are!: 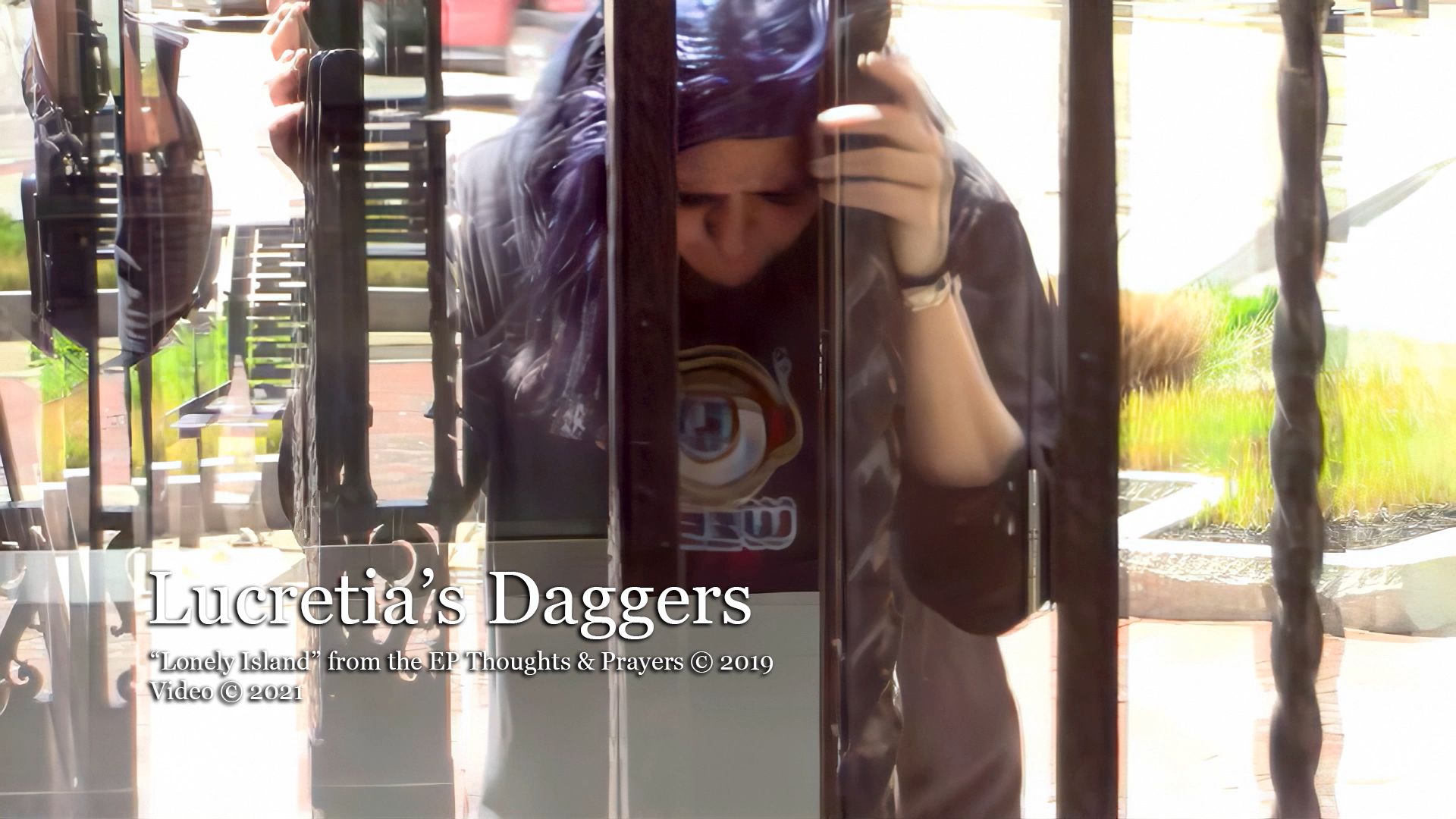 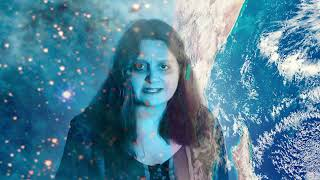 Please watch and spread these videos far and wide. We appreciate it!

Lucretia's Daggers is in the Watertown News!

Thank you to the early backers of our Indiegogo campaign & Paypal (cash donations & purchases); to Watertown artist Dawn Evans Scaltreto for her support and artistry in getting this project going; to JohnBar Axon for donating beautiful handmade backdrop fabrics for our "warehouse performance" shoot; and especially to Watertown resident artist Griegg Abadon for our "Lonely Island" videography!

Please check out our Indiegogo CDs/EPs, music downloads, patches, buttons, magnets,& packages, etc. and select your favorites. (See pitch video below.) Whether a small or large donation or purchase, you'll be contributing to social & environmental justice art and music of today. You could even choose to have a performance...at your house! 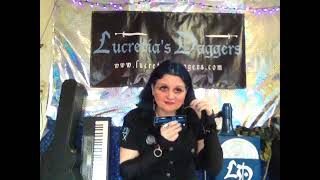 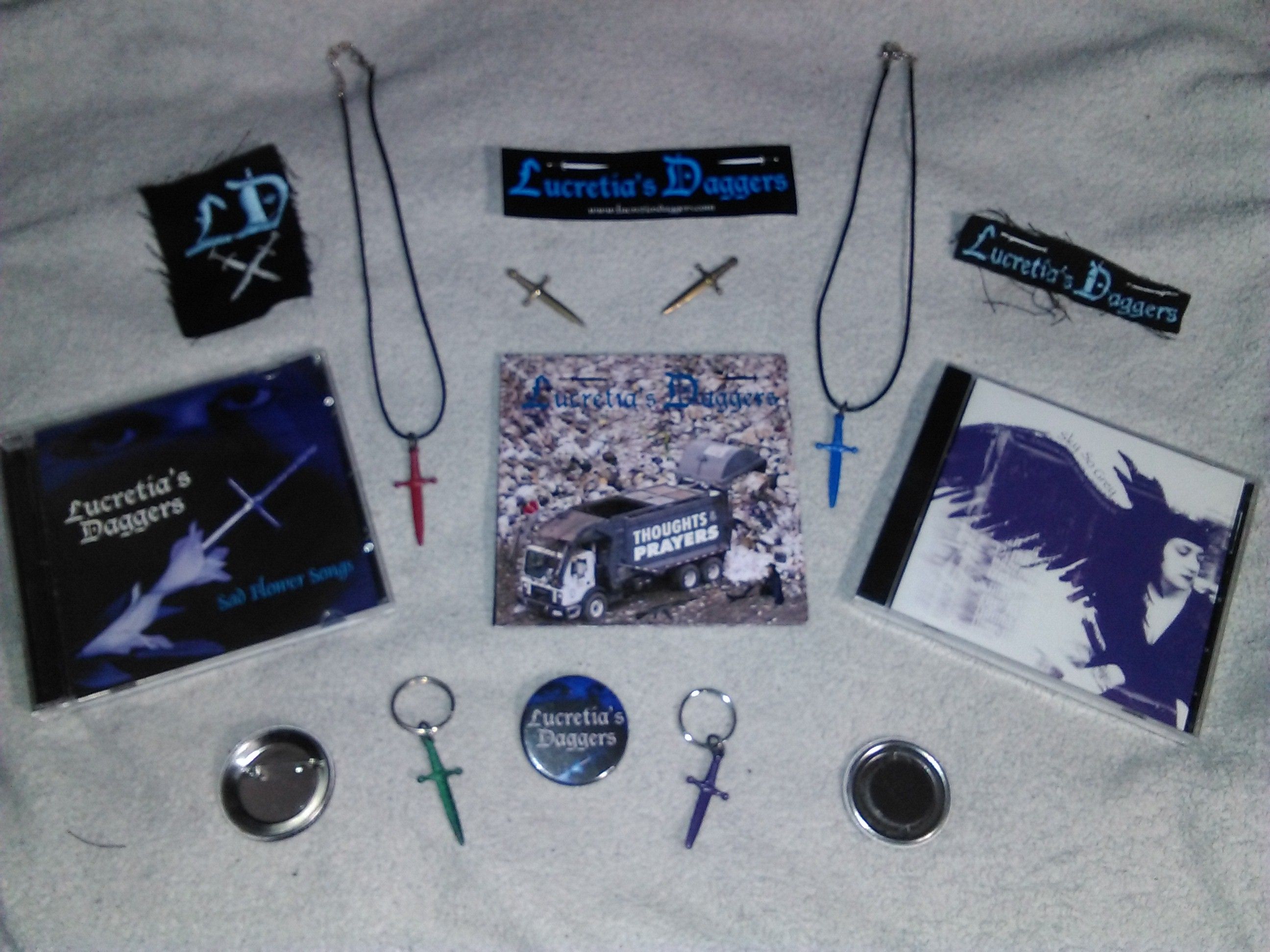 Recorded on Earth Day and released in the summer of 2019, "Thoughts & Prayers" is a mixed-genre socio-political electro-rock shock exploring gun violence, climate change, bad bosses/bad relationships, and depression. Get your copy (tracks or CD) from our Bandcamp or our Online Store for just $5! Or contact us at lucretiasdaggers@rcn.com. We'd love to hear from you! 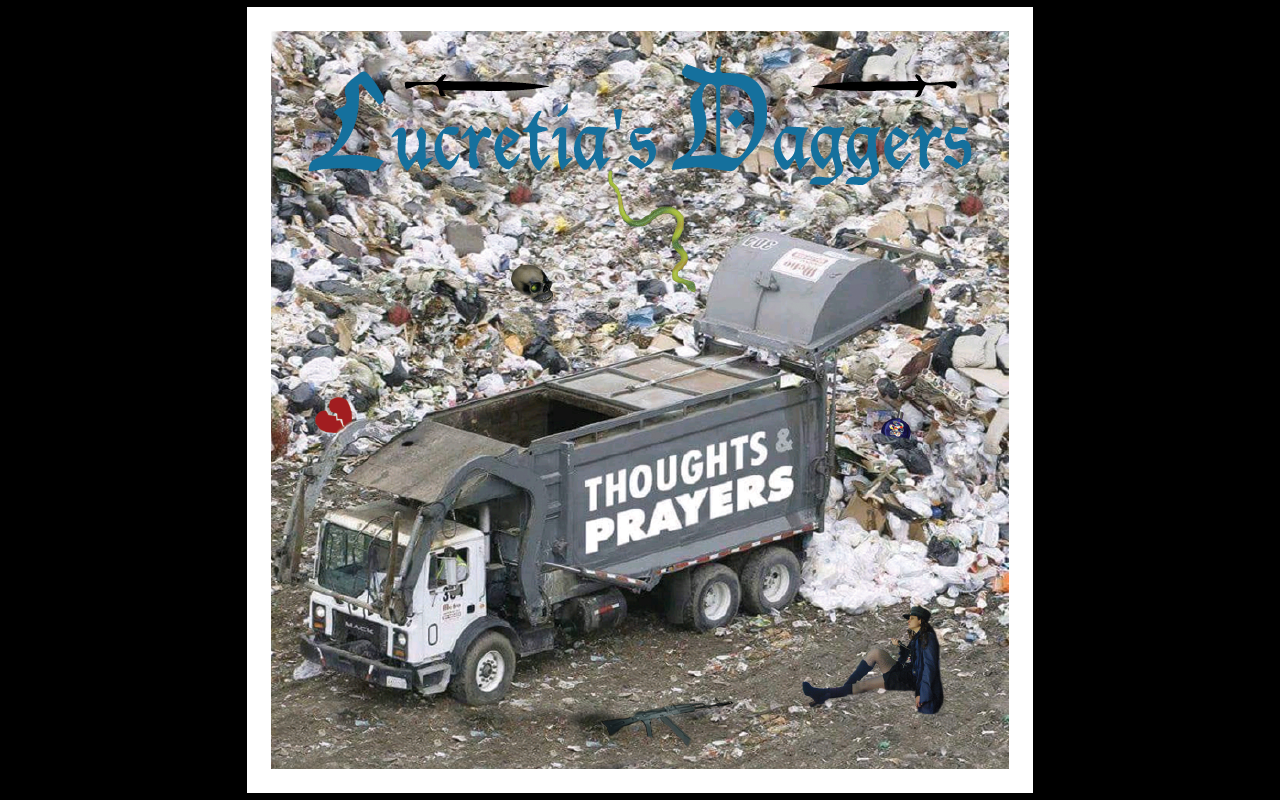 Ladies, gentlemen, and everyone in between:

LD's EP "Thoughts & Prayers" has been reviewed by the great Eric Saeger of Hippo Magazine out of Nashua, NH in the Halloween edition, 10-31-19! And he totally nailed it! See review on p. 38 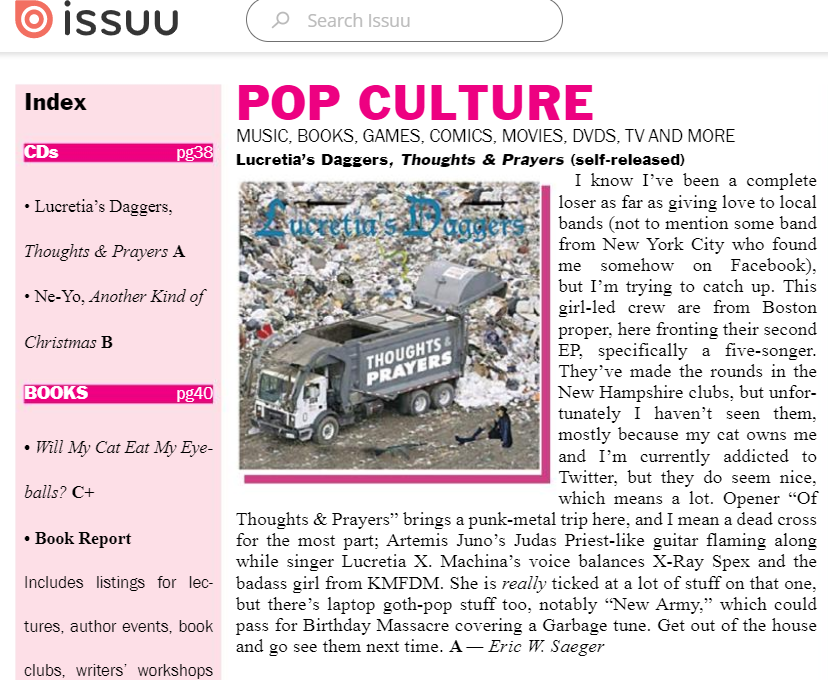 Stay tuned for news/announcements and feel free to contact us!

Thanks to everyone who came to the "Public Transit" video release / Anderson Mar tribute event @ Middle East Club, Cambridge, MA 7/3/14!
The videos (PG-13 and Uncensored) are now on Youtube and in the Visuals/Videos section of our website! 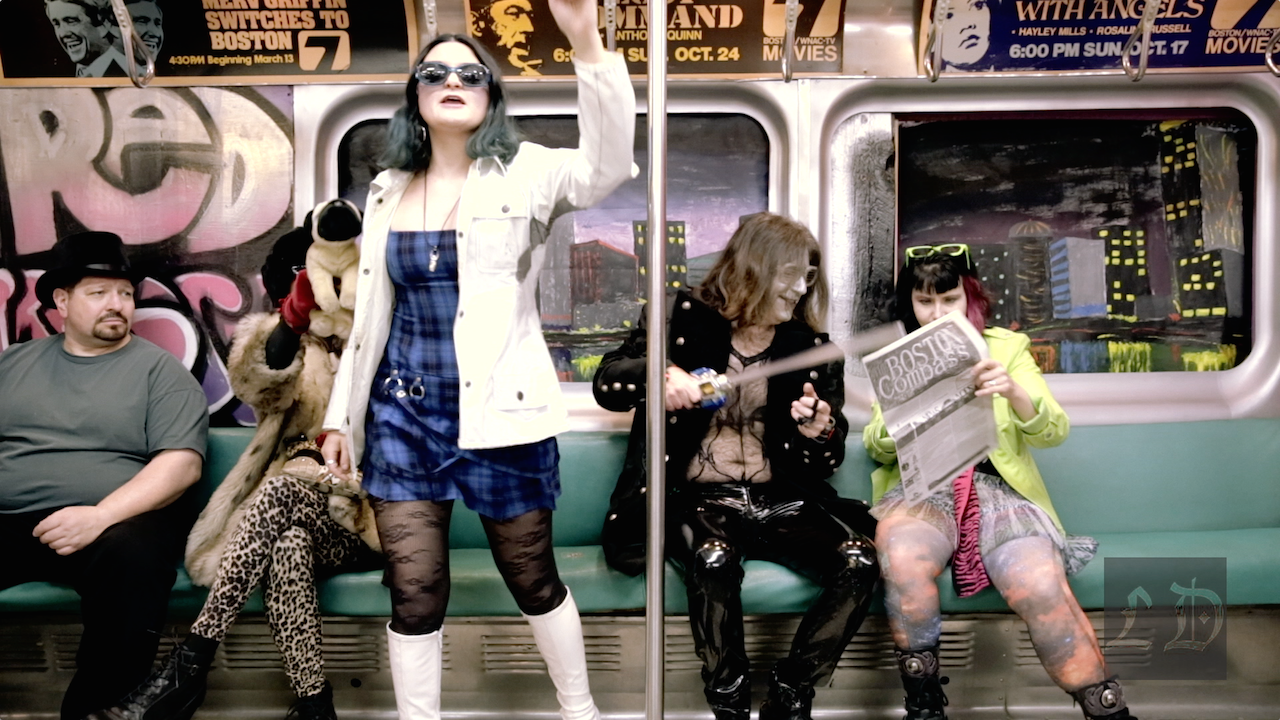